In Rio San Juan and Nicaragua Lake we fish for two Species:

IGFA World record for Tropical Gar is in Rio Frio Costa Rica, we fish there, Record is hold by Mr John Corry . We caught several of these specific gar ( Difference with Alligator gar is than they only have one line of teeth on the above Jaw) some where bigger than the record but due to identification problems ( at time of catch ) I did not register anything. The easiest way to catch gar in our area is on Bottom fishing with a piece of fish as a bait...More fun is fishing with a float maintaining the same natural bait close to the bottom... You see the float going...wait 5 to 10 second...then strike... in such a way we catch a lot of Alligator gar and some Tropical Gar......

In a day of specific fishing In Rio Frio or Cano negro, no problem we will catch many of these fish , all year round.

So far we caught the bigger Alligator gar on trolling, as we where fishing for Tarpon, it was around 100lb caught in July 2001. I figure than there are much bigger of these fish in the immensity of Nicaragua Lake ...( We have Bull shark and very big Saw fish around. .so why not really big gar...) .we should one day try to fish specifically for them.

Gar are not top fighters,( It obviously depend on what strength of line we are fishing... but we are generally fishing "heavy " as looking for tarpon...They take the same lures!!??) a Hit and then no rush you pull in....It become more difficult when the gar is close to the boat... and careful after with the Gaff because gar see perfectly the hand and attack...

If you are interested in gar I suggest you also have a look at the site of a good friend of us: Garman Page :A very well done page concerning Gar Fishing including a message board dedicated to Gar.

As trolling for big Tarpon on San Juan River ( Rapalla Magnum 14 ) we had around 10 am the biggest gar I ever had on my life around 1,40 cm long and so fat...( We had bigger since this report ) It release itself while I was making pictures...Really big and strong my guide Augusto could not hold it...( he is strong , born on the river banks , but him also never had such a big one...)

In Rio Frio with Jeff kLASSEN On this afternoon I wanted to show Jeff the beauty of our Jungle rivers and we where also after Gar…omnipresent every where but not to the boat we were casting traditional Rattle trap usually very efficient but No way? We even did try some strange special lures…than Jeff did bring. No doubt would have been much better to use bait on the bottom ( Small sardines, or part of dead fish , Gars are not difficult..) ) as local people do very successfully us also but Jeff wanted to Fish with lures ..well he had a nice Snook and several Wapote.

I report a lot of Tarpon hit , several Jumped but only one released to the boat...We also had Snooks, Big Machacas, and many Gars...We are in Summer time here , the Weather is very hot so is the water, tarpon are " lazy" not the other fish...

What can you expect? 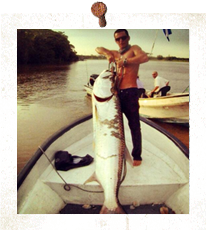